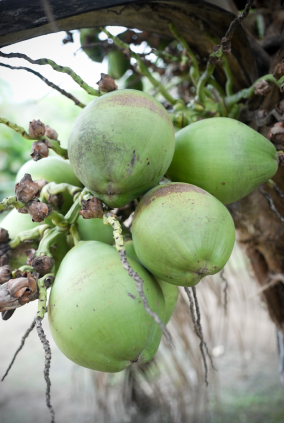 Coconut oil isn’t just for baking. Available in various melting points, coconut oil is widely used as a moisturizer in lotions and shampoos, and a cleansing agent in soaps and detergents.

For skin use, applying pure coconut oil to dry, cracked skin helps to smooth and soften the skin, and provides relief to minor cuts and abrasions. Chapped hands benefit from the moisturizing properties of the oil, but people have commented on the greasiness that the application leaves when just using coconut oil. To combat this, MadeOn lotion bars combine coconut oil with melted beeswax and shea butter, which have fast-absorbing properties to help seal the lotion into the skin. 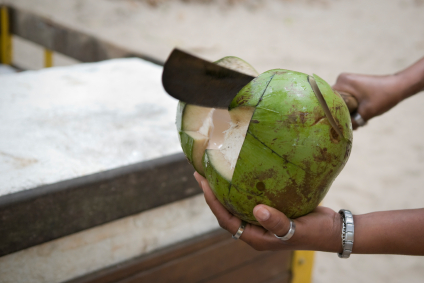 Coconut oil has a natural white color, making it an attractive ingredient without the need for colorants or bleach. Its melting point averages 76 degrees, keeping the overall hardness of the lotion bar soft enough for smooth application in cooler climates. If you’ve ever used it for cooking, you’ll notice that on the shelf in the heat of summer, the coconut oil will be in liquid form, while during the winter months it requires a spoon.

Popular food nutritionists like Sally Fallon and Mary Enig, Ph.D. have given plenty of public attention to the benefits of coconut oil, helping this fat become one of the oils of choice among food and health enthusiasts. Coconut oil now joins the ranks of other high quality fats like butter and extra virgin olive oil. For my family, I sauté vegetables in coconut oil, bake bread with it, and add it to our protein shakes as a healthy weight management tool.

Coconut oil is an integral part of my family’s diet, and now has been instrumental in helping relieve the pain of chapped hands and bleeding skin.

Here’s a Senegalese waist-deep in a lake, harvesting salt.

Those of us whose fingers have been laced with cuts and wounds would run screaming from such a sight. But here’s what I like about it: this man rubs on shea butter to protect his skin, and apparently, the shea does the job, since he’s in the 40%-salt-content water for six to seven hours a day. (If only he’d combine the beeswax with the shea to seal it in, then we could have a chat about the hard lotion bar!) Photo complies with Creative Commons Share Alike License.

Shea butter is the nutritious oil that comes from the nut of the shea tree. The tree is found throughout Africa and is used as a cooking oil in West Africa. It is also sometimes used as a substitute for cocoa butter in chocolate products.

Here in the West, shea butter is a popular cosmetic ingredient and is found in many high-end skin products. It is effective as a skin-softener and brings relief to dry, cracked skin. Because of its fast-absorbing qualities, shea butter works well as a “sealant” in lotion and hair products. Those with bleeding fingers and heels find that shea butter seals moisture into the skin after washing, and speeds up the healing process of cracks and splits in the skin.

I surveyed my lotion customers and found that those who used the lotion containing shea butter had the most satisfaction with their eczema problems. I substituted mango butter, cocoa butter and avocado butter for the shea, but the shea butter bar produced the best results for our customers. From my research, shea brings faster relief for those suffering from eczema, and because of the lack of scent, those customers who were concerned about allergies gravitated toward the shea butter lotion bars versus the cocoa butter lotion. Cocoa butter is not a common allergen, and it’s completely natural, but a scent can turn off an allergy-prone person.

Shea butter’s melting point averages 38 degrees Celsius, making it the “medium” melting point of the three ingredients in MadeOn’s lotion bar. This gives me plenty of room to modify the amount of shea butter in my product, and because of its soothing qualities for dry skin, I feel comfortable using generous amounts of shea butter when necessary, to create the perfect hardness of the bar.

When it comes to skin problems, shea butter has proven to be the most effective ingredient for soothing chapped skin, sealing minor cuts and scrapes, fading rashes and smoothing chafed skin. 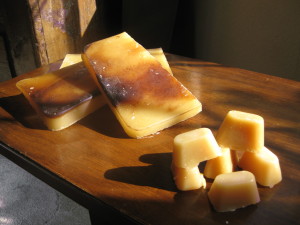 Beeswax is a natural wax produced by honey bees in the bee hive. The bees cap their honey with the wax and the beekeepers later separate the wax from the honey. Once filtered, the wax is used to make candles, cosmetics, shoe and furniture polisher, and even as a coating for cheese. It is also used as a food additive, often for the purpose of providing a shiny appearance or protective coating to food. Therefore, it is edible.

When beeswax is used in cosmetics, it works as a sealant and therefore is ideal for lip balms and lotions used for dry cracked skin. It acts as a bandage that seals cracked skin and helps the healing process of cuts and small wounds. Smooth to the touch, it has an attractive yellow tone with a warm, subtle aroma of honey.

Because beeswax has a melting point of 62 degrees Celsius, alone it makes a difficult skin sealant unless other ingredients are added. Together with coconut oil and shea butter, the three work beautifully to create a lotion bar that rubs on. The hardness of the beeswax seals in the moisturizing oils of the shea butter and coconut oil, to help heal cracked, bleeding heels and finger cuts. Paper cuts are quickly sealed and repaired when the lotion is applied, and the soothing ingredients work together to bring relief to the pain of split skin.